If there is one place we miss right now, it will be Bandung, a lovely city of West Java with tons of unique culinary places. Bandung was a great place for culinary hunting. From the building view, every restaurant came with a unique exterior and interior design. As for taste, most of it was delicious and came with a unique flavor too. 4 years lived there was not enough for us to explore everything. After taking our bachelor degree, we moved from Bandung to this lovely island of Batam to start our working life.

Talking about hits in Batam, last Thursday, we went to the soft opening of Sour Sally Mini at Mega Mall Batam Center. It brought us to the memory of our life in Bandung. We remembered that the first sour sally in Bandung was opened at Paris Van Java Mall, near Blitz Megaplex. As a college student, last time we didn’t have so much money for having fun due to monthly budget from our parents. Thus, sour sally was kind of expensive snack for us. Even more, one cup of sour sally would not make our belly full. Hahaha…

Few months ago, when we heard that Sour Sally will open in Batam, we were excited about it. Thus, once we knew they opened the store earlier than schedule, we grabbed our key and reached the place in minutes. 😀

Sour Sally changed their logo in 2015. Last time, there was a picture of girl, which we called it as “the Sally”. Now, “the Sally” was not in the logo anymore. Goodbye, Sally. Rest in peace now. Hahaha… Just kidding guys!

Sour Sally Mini only has 5 types of menu. For this time, we chose Cup Mini Black Sakura. 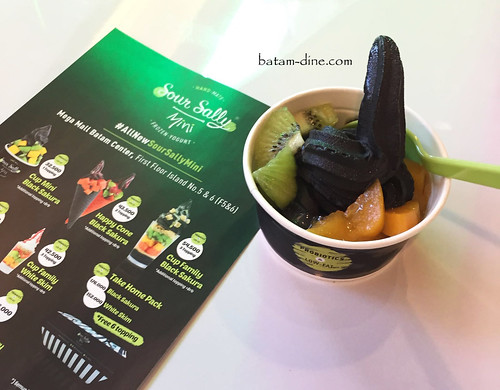 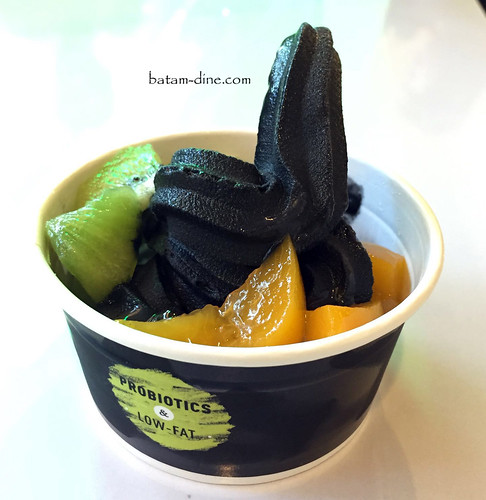 At the first sip, the yoghurt was sweet and sour at the same time, not overwhelming. The toppings of peach and kiwi were freshly cut and served too. Yummy! As for the price, even though we can buy it without thinking twice now, it’s still considered expensive due to the portion. Hehehe… A cup of Mini Black Sakura cost us at IDR40,500 (ID32,500 for the base and one topping + IDR8,000 for additional topping). Nevertheless, we can assure you that this frozen yoghurt was a healthy and delicious snack.

Please follow our social media below to join our regular giveaway on Friday morning.

Good luck and see you!